In the wake of our Outpost Club Top 100 World List, we have decided to go ahead and releaseour Top 100 U.S. List. We will be rolling the courses on the list out one-at-a-time until we get tocourses we have already covered in the World List. At that point, we will release the list ingroups—calling out courses that have made a move since January 1st (the cut-off for the WorldList) and any courses where we have new photos to share. Speaking of photos, we are verythankful to our super-talented photographer friends Jon Cavalier (@LinksGems), Andy Johnson(@fried_egg_golf), and Gary Lisbon (@GaryLisbonGolf) for providing many of the wonderfulphotos we will be sharing over the coming weeks. 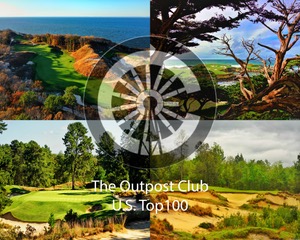 Outpost Club members were asked to vote on a list consisting of approximately 340 coursesacross the United States. Our membership is well traveled with 31 of them having played over80 courses on this list. Pebble Beach was the most rated course with 321 responses and therewere 134 courses with 75 or more responses at the cut-off date of June 30. Members weregiven no instructions about what to consider like “shot values” or maintenance/conditioning.They were simply asked to rate the course.
‍
No one on the Outpost Club staff received an advanced degree in statistics between the releaseof the World List and now, so we are sticking by our prior proclamation that “we are notstatisticians” and made no attempt to dive into standard deviations or to massage the data forthe U.S. List. We did decide that a course must have received 15 ratings to be eligible and thatwe would discount, to varying degrees based on number of ratings, courses that received lessthan 40 ratings.

A little information about the list: New York and California lead the way with 14 courses eachfollowed by Massachusetts and New Jersey with 7 each. In all, 30 states are represented in theTop 100. Thirty-six course would be considered modern designs. A.W. Tillinghast is thearchitect most represented on the list with 12 designs, followed by the team of Bill Coore andBen Crenshaw with 10, Donald Ross with 9, Seth Raynor with 8, and Alister MacKenzie and TomDoak with 6 each.

As with any list, there are sure to be criticisms, but all-in-all, we are pleased with the list. Itcontains some courses that haven’t been on previous Top 100 lists (including a Par-3 Course) aswell as many courses that you would expect to see (though not necessarily in the order youwould expect). We hope you enjoy this project and look forward to sharing it with you over thecoming weeks.